Because of the lack of aggregated data in the majority of countries it is difficult to have an exact ranking of countries based on volumes. Many countries reported that volumes are growing fast, in some cases more than doubling each year. In the European Alternative Finance Benchmarking report (based on volumes in 2014) the UK ranked first, France ranked second at a great distance. In 2015, UK and France are in terms of volume still the indisputable numbers one and two. Germany, Sweden and the Netherlands ranked 3rd, 4th and 5th. We have no reason to believe that in 2015, these countries don’t rank in the top 5 anymore but because of the lack of data (Germany, Sweden) we can’t give a precise ranking. In terms of volume per capita Germany and France rank lower than Sweden and the Netherlands and Estonia has on average a high volume per capita, although most come from P2Pconsumer lending.

Generally speaking, all types of platforms are present in most countries. Exceptions arise in the cases were a type of crowdfunding is prohibited by law (e.g. in Belgium P2P lending is not allowed). Equity based crowdfunding is on the rise in almost every country. In Portugal there is little diversity despite the fact that there are no major regulatory burdens. In Lithuania equity and lending based platforms can only operate with a credit institution licence.

As can be in expected in an evolving market, there is a high level of activity in most countries. Many new platforms have entered the market. There is a clear correlation between the level of activity and new regulation that came or will come into effect. E.g. in Lithuania, with less than 3 million inhabitants, five P2P consumer-lending platforms have been launched in the last year, anticipating new regulations.

The banking industry has had a wait-and-see approach and is now slowly entering the industry either with platforms owned by themselves or through partnerships. In Portugal Novo Banco Crowdfunding is launched, a donation based platform, in which Novo Banco accounts for 10 per cent of the total funding. The types of partnerships can be very different. There are examples of existing platforms that are integrated (white labelled) in a banking platform as is the case with Ulule and BNP Paribas in Belgium.

National governments take different stances towards crowdfunding. The UK government is the most progressive with the introduction of requirements for banks to be obliged to offer alternative finance options to clients to whom they refuse loans. In Belgium the government has taken an active role in launching, operating and financing crowdfunding platforms. Regulatory framework

Donation based crowdfunding is possible in every country under existing regulations, in some countries some additional conditions have to be met, e.g. in Finland a very strict Act on Fundraising applies, causing extra administrative burden.

Compared to the other types of crowdfunding, regulations regarding P2P lending differ a lot between countries. P2P lending is prohibited in Belgium. In France an entrepreneur cannot lend to another entrepreneur. In Italy lenders cannot directly choose borrowers. In some countries P2P consumer lending is fully unregulated, but legislation is prepared to protect consumer interests and prevent irresponsible borrowing.

Many countries implement special regulations to foster debt and equity based finance to promote entrepreneurship. For example, Austria’s new legislation is considered to be at the forefront of legislation in Europe. With the new law the obligation to publish a complete prospectus will only be needed for raising over €5 million. Many other countries have implemented or are planning to implement similar legislation with different maximum amounts. Belgium seems to be lagging behind.

France and the Netherland are examples of countries were recently the obligation for lending and equity based crowdfunding platforms to register is implemented. In both countries more than 60 platforms are registered. 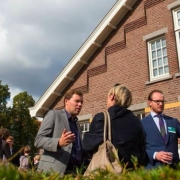