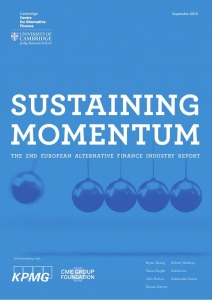 The European online alternative finance market grew 92% to €5.4 billion in 2015, according to the second annual survey by the Cambridge Centre for Alternative Finance, CrowdfundingHub was exclusive Benelux partner.

Sustaining Momentum
The report released today, entitled “Sustaining Momentum”, had the support of 17 major European industry associations and research partners, and was based on data from 367 crowdfunding, peer-to-peer lending and other alternative finance intermediaries from 32 European countries – capturing an estimated 90 per cent of the visible market (for more details on Alternative Finance in Europe, check our report “Current State of Crowdfunding in Europe“, with the Alternative Finance Maturity Index).

UK, France, Germany and The Netherlands largest markets
The United Kingdom was by far the largest in Europe at €4.4 billion, followed by France at €319 million, Germany at €249 million and the Netherlands, €111 million. Other large European markets include Finland with €64 million, Spain at €50 million, Belgium at €37 million and Italy at €32 million. The Nordic countries collectively accounted for €104 million, while Central and Eastern European countries registered a total of €89 million.

The Netherlands are (after UK) the largest market for peer-to-peer business lending (74 million in 2015, a growth of 34%).

Read the full article on linkedIn.

The full report can be downloaded from here.